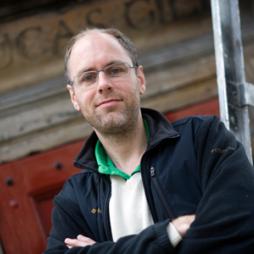 Lucas Evers joined Waag in April 2007 and is currently leading Waag’s Wetlab. He is actively involved in several projects that concern the interactions between the arts and sciences, arts and ethics and the arts in a contemporary makers culture. The Wetlab is a laboratory where arts, design, sciences, engineering and the public meet to research biotechnologies and their impact on society and ecology.

Lucas Evers is trained in fine arts and teaching at Maastricht Academy of Fine Arts and Design and he studied politics at the University of Amsterdam. He worked De Balie Center for Culture and Politics and Melkweg in Amsterdam, programming cinema, new media and politics.

He organized a retrospective of French cinematographer Chris Marker was involved in projects such as ‘net.congestion – international festival of streaming media’, Next 5 Minutes, e-culture fair, an Archeology of Imaginary Media and a number of programs related to the societal debate about the life sciences.

At Waag he worked and works on projects such as Trust me I’m an Artist (ethics of art and science collaboration), Future Emerging Art and Technologies, Hack the Brain, Do It Together Bio, Critical Making and initiated Designers and Artists for Genomics Award (now Bio Art & Design Award).

His interests lie in the way we can learn from the interactions, the differences and similarities, between artistic, scientific and other cultures of research.